The Surfrider Foundation San Mateo County Chapter has been engaged in an effort to reestablish public access to Martin's Beach, and to preserve access and the beach for future generations to enjoy. This blog is a place to keep posted on campaign efforts, learn more, share your love for Martin's, and get involved.
Photo credit Richard Yelland

UPDATE!  A summary report from the public workshop can be found here.

The Surfrider Foundation is organizing a workshop to solicit input from the beach-going community about the particulars of restored public access to Martin’s Beach. The workshop will be held on Monday, July 20, 2015 at the Pacifica Community Center (540 Crespi Drive, Pacifica) from 6pm to 9pm.

Public input from the workshop will inform negotiations between the California State Lands Commission and Silicon Valley billionaire and property owner Vinod Khosla. The Commission is tasked with negotiating an agreement that will restore public access to Martin’s Beach, as required by California Senate Bill 968, signed into law last year.

Recently, news media reported an “opening” of Martin’s Beach for the summer. However, no official announcement of the opening has been made from the Khosla camp, and it is not clear to the public which days the gate will or will not be open. At best, this appears to be a seasonal, selective opening of the gate to visitors, so it's important for the public to continue to support and be active in efforts to permanently restore public access.

This workshop is an important opportunity for the public to play an active role in restoring access to their beach! Public input collected from this workshop will be vital to understanding the public's needs and wants with regard to restored access.

The workshop will consist of updates on efforts to restore access to Martin’s Beach and roundtable discussions of various aspects of access such as hours and days of operation, accessibility, amenities, allowable uses, and access fees. Participating members of the public will be asked to write down and submit their opinions on these subjects. Representatives from both the State Lands Commission and Coastal Commission will be present at the workshop and provide updates to the public on their agencies’ roles in restoring public access.

Please attend to make your opinions known and voice heard!

See below for flier, and click here for the draft workshop agenda.

FEBRUARY 23 2015 (REPOST FROM SURFRIDER.ORG)
BY ANGELA HOWE
It looks like Surfrider Foundation will be going back to court to fight for access in the Martin's Beach case.  Billionaire venture capitalist property owner, Vinod Khosla, filed a Notice of Appeal this week to try to overturn the very strong lower court ruling.  Judge Barbara Mallach from the San Mateo County Superior Court ruled in favor of beach access with a December 5, 2014 decision requiring Khosla to obtain a permit from the Coastal Commission for any change in access to the beach.

After the December ruling that required Vinod Khosla to “cease preventing the public from accessing and using the water, beach, and coast at Martin’s Beach,” Khosla's property managers have only opened the road sporadically.  By filing a notice of appeal, Khosla's attorneys are seeking relief from Judge Mallach's ruling.  Instead of complying with the Judge's order and applying for a necessary Coastal Development Permit from the California Coastal Commission, which is required for any change to public beach access (including restrictive gates, signage and security guards), Khosla and his attorneys have appealed the decision, which could tie the issue up in court for over a year to come.
Surfrider Foundation is committed to defending our lower court victory and continuing the fight to re-open access at Martin’s Beach.  Quite simply, Khosla has violated California law under the Coastal Act and must apply for a permit for any "change in the intensity of use of water, or access thereto" for the coastal land.  He has refused to apply for this permit despite being told to do so by the Superior Court twice, including the court's 2009 dismissal of Khosla's lawsuit against the County for requiring a Coastal Development Permit.
Meanwhile, the Surfrider Foundation San Mateo County Chapter is also working with the State Lands Commission to hold a public hearing on beach access in their effort to negotiate with the property owner pursuant to Senate Bill 968.  SB 968 was signed by the California Governor this past September and added Section 6213.5 to the Public Resources Code.  This bill allows the State Lands Commission to negotiate a public easement to the beach or to acquire the road or easement via eminent domain.  In addition to the litigation, these are alternative means of ensuring the public's right to access the public beach at this special place in Half Moon Bay.
5 comments:
Email ThisBlogThis!Share to TwitterShare to FacebookShare to Pinterest

The San Mateo County Sheriff’s Office released this news release yesterday, January 27, stating the Sherrif's Office will not be making arrests or issuing citations for trespass at Martin's Beach. 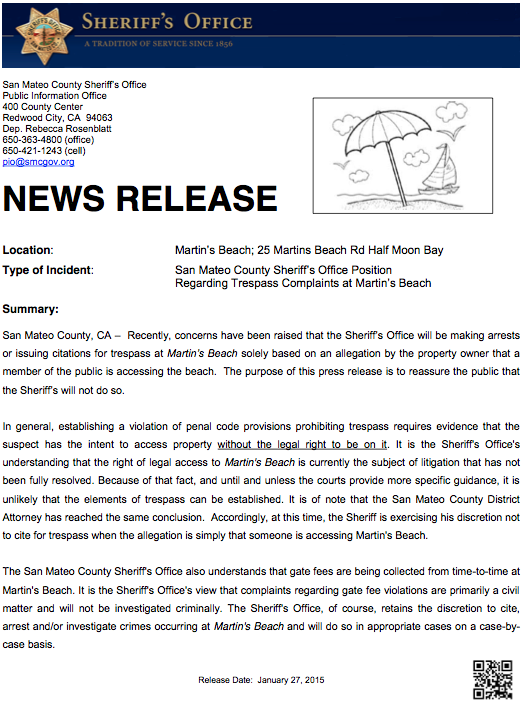 3 comments:
Email ThisBlogThis!Share to TwitterShare to FacebookShare to Pinterest

As 2014 came to a close and 2015 began anew, visitors old and new were delighted to find the gate to Martin's Beach Rd. periodically opened!  The gate was open several days between December 21st and January 7th.  Folks have been documenting their visits on the Friends of Martin's Beach Facebook page. 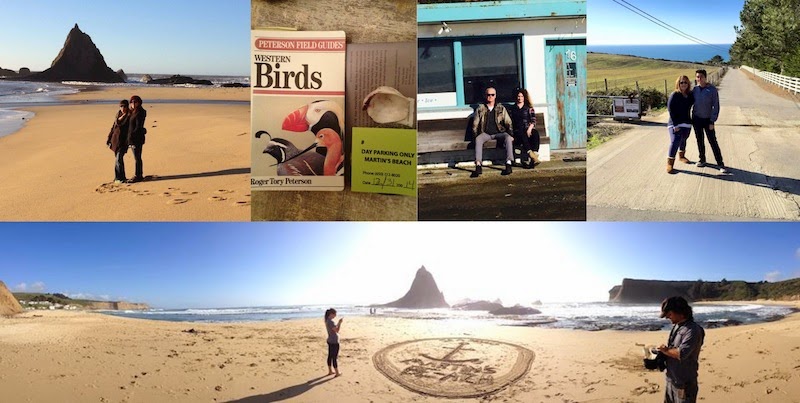 Most reported being charged a $10 per car fee to park.

While an open gate is welcomed action after years of closure, many worry that this is just a temporary ploy to appease the court while the Khosla camp continues to seek more palatable legal determinations in their favor.  This concern appears consistent with the filing of a Notice of Intent to Move for a New Trial, filed December 16 and reported on here.

As this was not at all a surprise, on January 14, the Surfrider Foundation's legal firm, Cotchett, Pitre & McCarthy, filed this opposition brief. The image to the left, which shows when the gates have been opened and closed since the Final Ruling came out, is at the end of the brief.

A Surfrider Foundation volunteer is also tracking people's visits to Martin's Beach. You can see the latest on this Facebook page.

Concurrently, while action from the court is awaited, the State Lands Commission has begun to prepare a letter to be sent to Khosla to commence the negotiation process outlined by SB 968 (Hill), which was signed into law last year and currently effective.

If Khosla responds affirmatively, it could commence a year-long process of negotiation by the state agency, which would involve public input.  If not, the Commission will have the discretion to take action into its own hands and consider eminent domain proceedings to establish a state-owned access way to and along Martin's Beach.
15 comments:
Email ThisBlogThis!Share to TwitterShare to FacebookShare to Pinterest
Labels: beach access, Khosla, martin's beach, martins beach, sb 968, State Lands Commission, surfrider foundation

Khosla to Judge: I Was Given an Unfair Trial In the latest turn of events, on Dec. 16 attorneys for Vinod Khosla filed a notice of intent to move for a new trial.  Their reason?  Well, there were several, including "irregularity in the proceedings," "improper orders of the court," "abuse of discretion by the court," and "accident or surprise."

It would be nice if it could be said that this filing was an accident or surprise, but unfortunately Khosla's efforts to skirt the rules seem to be par for the course.

Khosla's attorneys also sent a letter this week, addressed to the California Coastal Commission, in response to the Dec. 8 letter sent by Commission staff to Steven Baugher, manager of Martins Beach I and II, LLCs.  In the letter, they cop to the apparent reason that the gate is still closed to the public, despite Judge Mallach's Final Order that ordered the gate to be opened: bad weather.

In the Judge's order, she stated that the gate was to be opened to the same extent that it was at the time of purchase.  In Richard Deeney's testimony in the case, he stated that he would close the gate when there was bad weather, when there wasn't someone to take money at the gate, or when he felt like it.  So Khosla's attorneys are attempting to justify continued, uninterrupted closure of the gate based on those specific words in Mr. Deeney's testimony, despite the reality that the gate was not permanently closed for "bad weather" or any other reason when the property was owned by the Deeney family.

Judge to Khosla: "The Gate Across Martins Beach Rd Must Be Unlocked and Open" NOW

As reported on the Surfrider Foundation Coastal Blog, on Friday, December 5, San Mateo County Superior Court judge Barbara J Mallach provided clarity to her final ruling issued November 12, in which she ruled that Khosla's changes to the property--including permanently locking the gate across Martins Beach Rd--constituted development and therefore require a permit from the California Coastal Commission.  Clarification came in the form of a Final Order from the court, which amongst other things orders Khosla to open the gate and restore access to what it was when he bought the property.

For those who have been wondering when the gate would be required to be reopened, the time has come.  We have arrived.  Open, Sesame! 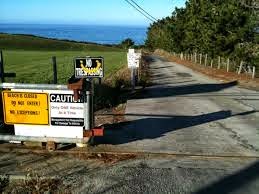 But Khosla has yet to comply.

Following on the heels of this order, the California Coastal Commission sent its own clarifying message to Khosla, via the property manager Steven Baugher.  In case the threat of law is not motivation enough to comply, the Commission sent a seven page letter stating that the property owner is in violation of the Coastal Act for unpermitted development including but not limited to the locking of the gate to bar public access, use of security guards, pursuit of trespassing enforcement against visitors, and placement of signs to deter access, AND that these violations are subject to various fines, including a fine of up to $11,250 per day per violation and $15,000 per day per violation, respectively.  AND the Commission notes that the fines are cumulative from the notice of violation, which was sent in 2011.  Although Khosla is a billionaire, fines racking up to potentially tens of millions of dollars would probably not go unnoticed. 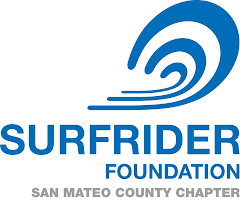